I was working in an administrative role on board, working on plans to increase access to our services for more people in Madagascar where the ship was docked, when a patient arrived unexpectedly at our bridge. On his face was the biggest tumor our surgeons had ever seen and he was close to death. After hearing about Mercy Ships and the hospital ship on the radio, Desperate for help, Sambany sold a paddy field to pay for transport and traveled for two days to reach the port. With the help of friends who transported him from his village to the main road, he was able to reach the ship in time.

Sambany was immediately taken care of by our hospital team who assessed him, realizing that he had to act quickly. After several scans, diagnostic tests and many questions, it was decided that the choice to perform the risky operation should be made by Sambany himself. When presented with the facts and risks of the surgery, including the risk of death, Sambany replied, “I am already a dead man. 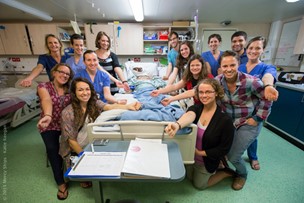 During the 14-hour operation, Sambany lost a lot of blood. Luckily for him, the ship has a walking, talking blood bank! Our lab team quickly mobilized to track down any crew of the same blood type who had registered as donors. I received a message on my pager asking me to go to the hospital immediately. I sat down, was prepped and before I knew it, my blood was flowing into a bag. This bag was transported directly to the operating room, as hot as when it came out.

In all, Sambany received 17 units of blood from 17 different crew members. These crew members worked throughout the ship in different positions and roles. Sambany’s operation was a success, not only thanks to the medical team who treated and performed on him, but it could not have been done without the wider ship community. I felt honored to be included in saving his life and returning him to his village in good health. Months later, after his recovery, he managed to walk back to his village unaided, ready to live a new life, tumor free.

Mr. Ally Jones (https://www.mercyships.org) will be at FIME 2022, where Ships of Mercy will be present in the FIME Charity Zone. Participation is free for The Florida International Medical Exposition held at the Miami Beach Convention Center –July 27-29and 2022. Register for free at https://fimeshow.info/3vx6Rat Contact: Carol.Prokap@Informa.com for more information about Mercy and the exhibitors, speakers, talks and events planned for FIME 2022.

July 14, 2022 – Due to the recent increase in influenza, COVID-19, and other illnesses in Southwest Florida, Lee Health is reducing the cost of telehealth visits for urgent care through Lee TeleHealth from $49 to $20. Lee Health is temporarily offering this service at a discounted price for community members so they can use […]

New treatment center to provide comprehensive drug and alcohol treatment in the heart of Miami November 8, 2021 – GIA Miami is proud to announce the official opening of its sister clinic, Vita Recovery, a sophisticated Partial Hospitalization Program (PHP) and Intensive Outpatient Program (IOP) specifically designed to treat drug addiction and the ‘alcoholism. The […]